skip to main | skip to sidebar

Finally arrived in Italia!
The plane ride from Philly to Frankfurt was not bad. They provided us with complimentary drinks the entire flight, and even gave us a satisfying dinner (I chose pasta with a cream sauce, bread, some kind of veggie/rice mix, cheese, and a brownie) and then just before landing gave us breakfast (bagel, cheese, fruit cup, and granola bar).
At Frankfurt we explored the airport waiting for our next flight to depart 2 hours later, and then that quick 1.5 hour flight to Florence! We went over the Alps, and I was able to take a few pictures using a friend's camera phone. I'll try to post that in a bit. 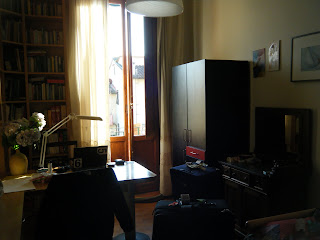 Immediately we were placed in taxis sent to our host families! Patrizia was here waiting for me, and showed me my room and gave me a tour of the house. I arrived here at 2:15ish
their time, which is 8:15 our time. I had not slept at all on the plane, so we're looking at almost 24 hours straight!
I took some pictures of my room! Those windows are doors that open into a balcony. Every room in the house has a balcony. The front rooms overlook the river Arne.
I also took pix of the cat, mostly for the animal lovers. i'm not sure if I'm a fan yet. 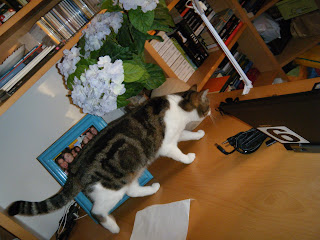 Guido just walked in.. he speaks no English. This should be interesting. Patrizia speaks very good English. The daughter Laura is in Spain until the end of the month so I'll have to meet her later.
Ciao!
Posted by Ali at 17:55

Ali
Firenze, Italy
I'm currently studying abroad in Florence, Italy for 3 months. (14 January - 24 April) This blog is a way for me to share with family and friends everything I'm up to!